A new study offers more data on the role cannabinoids play in the brain’s ability to extinguish traumatic memories. (AdobeStock)

The ability to forget fear is vital in allowing us to live normal lives. If we remembered every ounce of fear we’d ever felt, we wouldn’t be able to function. One of the hallmarks of post-traumatic stress disorder (PTSD) is impaired fear extinction—the process that helps our brains forget traumatic events.

A new study out of Leiden University in the Netherlands explores anandamide, a cannabinoid produced naturally by the human body, and its role in fear extinction. They did so by pioneering a technique that inhibits anandamide production in the brain.

The study could have profound implications for the use of cannabis in treating PTSD. Millions of military veterans and other trauma survivors already use medical cannabis to manage PTSD, but scientists are still exploring the mechanisms involved in the healing process.

Working with the body’s own cannabinoids

The identification of CB1 and CB2 receptors in the early 1990s led to the discovery of compounds in our bodies that stimulate them naturally. These compounds are known as endocannabinoids—cannabinoids produced by our bodies. Over a dozen endocannabinoids have been identified. The two most commonly studied are anandamide (AEA) and 2-AG.

If you’ve ever worked out so hard that you feel totally blissed out for a few minutes, you’ve felt anandamide at work. That feeling is the reason anandamide was named after the Sanskrit word for ‘bliss.’ This light euphoria, sometimes called the runner’s high, lasts just a short period of time because anandamide is co-released with fatty acid amide hydrolase (FAAH), an enzyme that breaks down anandamide.

Think of the anandamide-FAAH relationship like the elements in a game of Hungry Hungry Hippos. If there aren’t that many FAAH hippos munching, the bliss-causing marbles of anandamide remain on the table a lot longer.

There’s a significant body of work that shows reducing FAAH expression makes all sorts of feel-good effects last longer. Anandamide makes us feel good by triggering the reward center of our brains, and the longer it sticks around, the longer we feel good.

The team at Leiden University, led by Mario van der Stelt, wondered what would happen if they did the opposite—if they reduced the amount of anandamide produced by the brain instead of reducing FAAH. Finding a specific tool to reduce anandamide production would paint a more detailed picture of what role it plays in our bodies. So that’s exactly what they did.

The researchers then compared behavior in normal mice and anandamide-suppressed mice. Mice with blocked anandamide production were way more stressed out—as evidenced by higher cortisol levels—than normal mice. The anandamide-suppressed mice also held onto conditioned fear for much longer than normal mice. The compound van der Stelt’s team developed isn’t targeted specifically at anandamide–it suppresses other endocannabinoids (OEA and PEA) as well. This means that their behavioral observations could be due to changes in any one of those closely related compounds, though anandamide seems the most likely culprit.

This is a highly technical discovery, but an important one. It’s the first study of its kind to prove that lowering anandamide levels has negative consequences on emotional behavior. This could explain why PTSD develops—those brains don’t produce enough anandamide to remain emotionally balanced. It could also explain why flashbacks feel so visceral to people with PTSD, they literally lack the mechanism to forget those traumatic memories.

Understanding anandamide’s role gives us more insight into why cannabis, with its ability to mimic the effects of anandamide, could help PTSD patients. 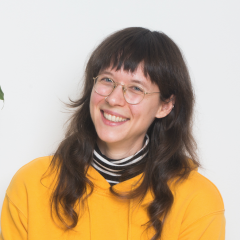 Zoe Sigman serves as Broccoli Magazine’s science editor, previously served as the program director for Project CBD, and has testified about CBD and cannabis regulation before the FDA. She thinks science is magic made real, and loves breaking the technical jargon down so anyone can understand it. IG: @zoe_sigman