hen Maria Alexander landed a job at a nonprofit in Los Angeles in 2002, she was recovering from more than a decade of struggles with heroin, then crack cocaine.

Petty drug offenses led to stints in the Los Angeles County Jail system, a years-long cycle until a fateful ‘02 arrest for $5 in crack.

Instead of jail, Alex went into treatment. She spent six months recovering at a facility in North Hollywood called CRI-Help. When she had a hard time finding a job, CRI-Help sent her to paid job training at the Center for Living and Learning.

Today, 57-year-old Alex is the Center for Living and Learning’s executive director. Based in Van Nuys, CA, she manages caseworkers out in downtown L.A.’s Skid Row, the city’s homeless epicenter. Local health officials have confirmed 97 cases of COVID-19 at a single shelter there.

Each week, CLL caseworkers attempt to salvage a handful or so of society’s most vulnerable—people formerly incarcerated, homeless, or struggling with addiction. The CLL gets them housing, jobs, and help with the little things in between.

And some of the Center’s most essential funding this year comes from Californians buying legal cannabis—the tax dollars of which voters earmarked for youth, environment, or health and safety.

Passed in 2016, legalization Proposition 64 has created 500 licensed stores and delivery services so far whose sales taxes flow to those most impacted by the War on Drugs—from communities of color, to at-risk youth.

Legal cannabis taxes’ impact is growing in 2020 because COVID-19 has blown a predicted $50 billion hole in the state’s budget. 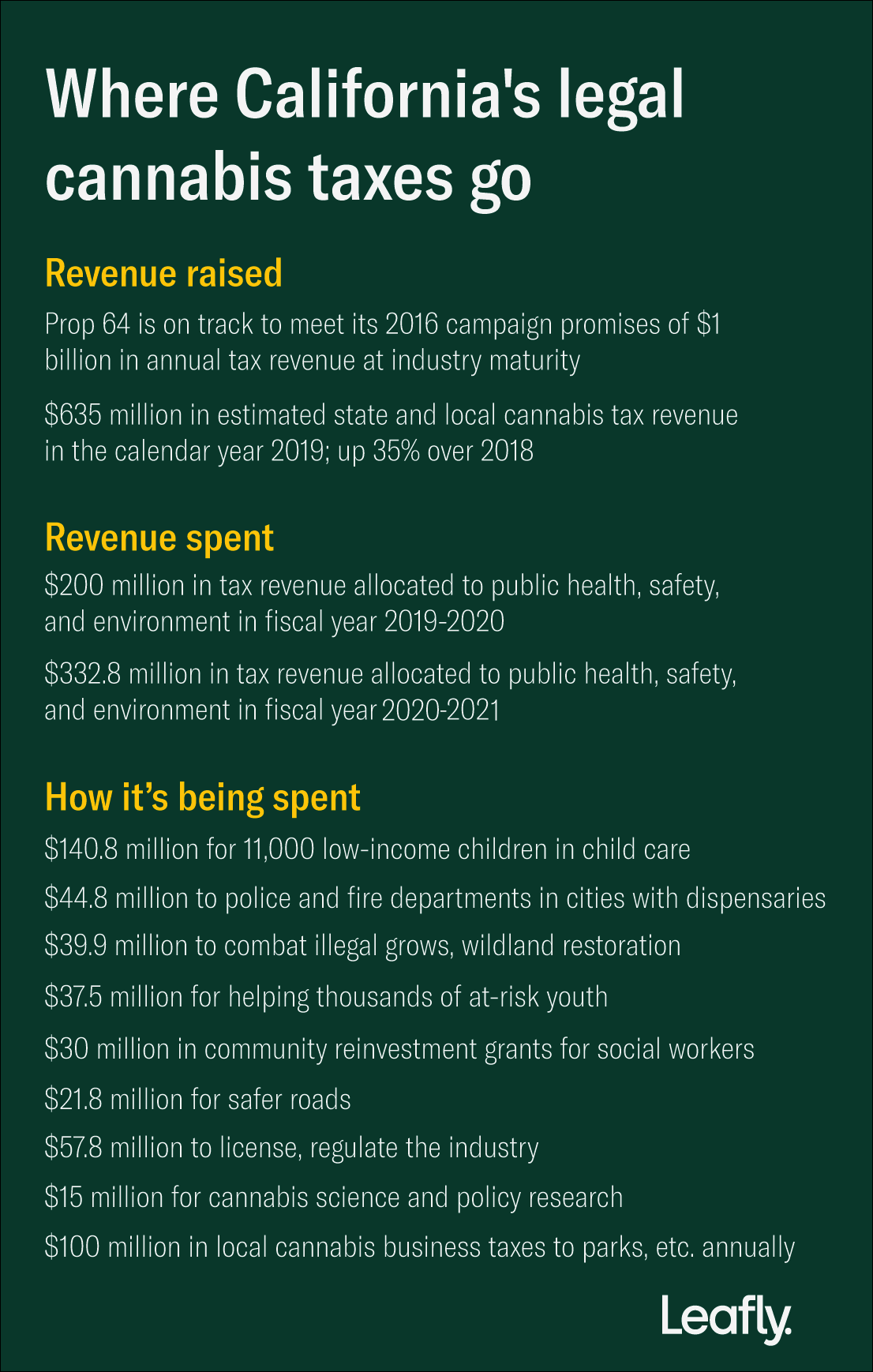 Marijuana tax revenue is so vast, the CLL grants are just a tiny sliver, totaling $30 million to 67 groups like Alex’s for the coming fiscal year 2020-2021.

In 2020, the CLL is splitting $1.25 million in grants with the L.A. County Department of Public Health, the Tarzana Treatment Center, and a mental health nonprofit in Van Nuys called Valley Care Community Consortium.

At the CLL, money from legal cannabis purchases helps staunch the COVID-19’s spread in L.A. County, which has nearly half the known cases in California. Around 300 homeless people there have tested positive for the hyper-contagious virus. The CLL will see 300 to 500 cases this year.

Every legal pre-roll, or eight-ounce cannabis purchase helps Alex’s team get someone back on their feet, whether it’s clothes for a job interview or a loan for a security deposit on an apartment.

Many helped are leaving treatment at CRI-Help, just like she once did.

“We don’t turn anyone away,” Alex said. “There’s just so many people out there that want and need our services.” 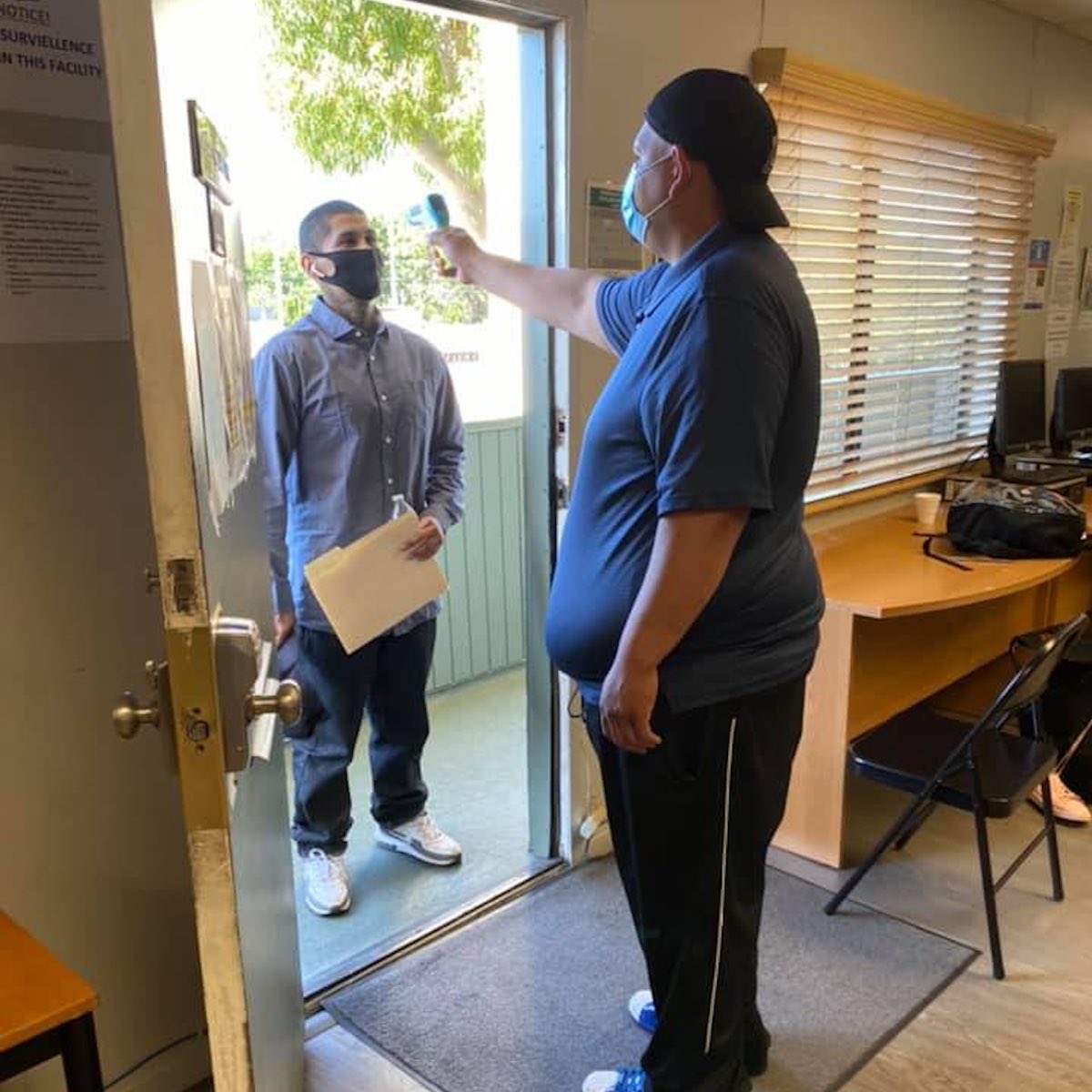 Center for Living and Learning staff check the temperature of a job trainee. (CLL via Facebook)

After leading the world in caged human beings per capita, some states in America have begun locking up fewer non-violent offenders.

“At the end of the day, it is public health that addresses the desperate situations created by problematic drug uses that ends up in a homeless situation, that ends up in someone being treated at a hospital,” Gudiño said. “And society, for the greater part of 40 years, sought to address that by incarceration with absolutely no help or support.”

Along with legalizing cannabis, Prop 64 built on a ‘treatment not jail’ paradigm shift ushered in by Prop 36 and then Prop 47 in California.

Pregnant addicts, discharged into the street

Alex is an exemplar of this shift away from jail and toward treatment. 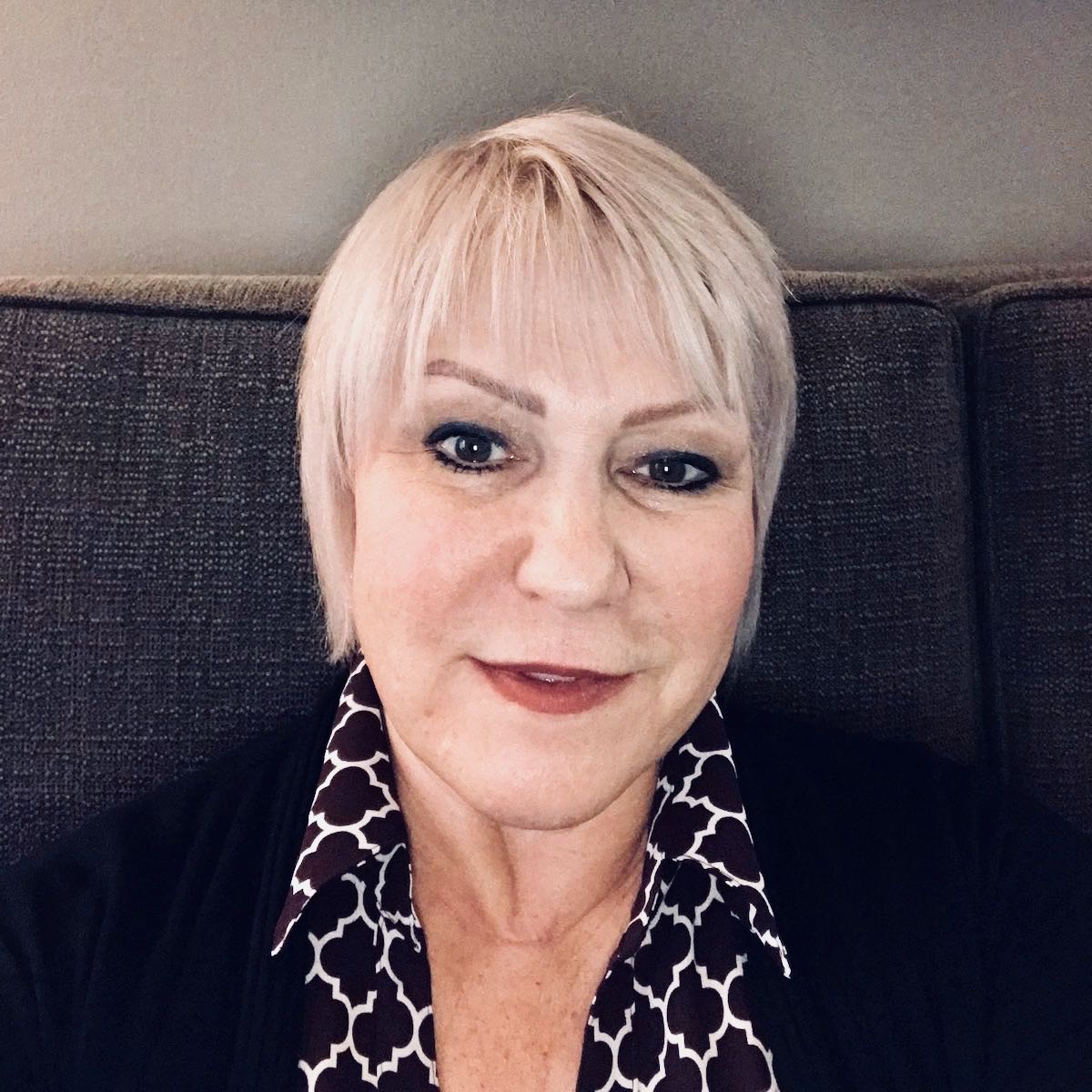 In 1980, after graduating high school, she left her native Chicago for college in L.A.; theater, television and film production. There, she tried heroin, and her use morphed into a dependency about “two or three years later,” she said.

Every stay at county jail for a small-time drug bust ended the same way—even when Alex was several months pregnant.

“I went in and out of that jail maybe three times or more [in 1991]—I was there nine months pregnant with my daughter,” she said. “But they didn’t even say, ‘Do you have somewhere to go?’ And I didn’t.”

After being arrested, she underwent heroin withdrawal in the jail hospital nursing ward. A social worker removed her daughter, beginning an on-and-off legal battle that would continue for years.

Alex spent years navigating the legal system—attempting to hide behind a facade of sobriety to survive.

“I tried to jump through the hoops of whatever social services wanted but I never really got the help I needed because I didn’t want to admit how bad I was,” she said. “I thought if I had admitted how bad my drug usage was, they’ll never give (my kids) back.”

Prop 36, which passed in 2000, gave non-violent drug offenders a chance at treatment rather than jail. With her admission to CRI-Help in 2002, Alex was one of those people.

“I did six months (at CRI-Help) and then six months in sober living. For me, it was good because then the whole thing was up,” she said. “I couldn’t pretend that it, you know, wasn’t as bad or whatever.”

Her life had changed.

When she joined the Center for Living and Learning, the nonprofit got her a bus pass for a month and rented her an apartment since she couldn’t sign a place for herself, due to past evictions. She received an attorney who helped her regain custody of her two children, who are now ages 29 and 21. The legal fight lasted two years. “Nothing happened overnight,” she said.

Losing everything to crack and heroin led to a complicated, mostly resentful relationship with drugs.

But when she submitted an online application a few years after joining the CLL, her views began softening.

“I was on some website where I was able to submit a success story for Prop 36 and … maybe a year or two later, I was contacted by Drug Policy Alliance,” she said.

She traveled to Sacramento with the advocacy group to lobby for more Prop 36 funding, joining back-to-back meetings with lawmakers.

“That opened a whole new world for me of advocacy and drug policy,” Alex said. “And prior to that, you know, I don’t know what I really felt about it because I felt like heroin had ruined my life.”

Her thoughts evolved upon learning more about things like Good Samaritan laws that allow people to call 911 for an overdose without having to fear arrest.

Alex once joined the DPA for a trip to Lisbon, Portugal to study the health-centered approach to drug decriminalization there.

“It’s just turned around my perspective of how I feel about these things,” she said, pondering how life may have been different if she was offered rehabilitative services sooner

“I didn’t know there’s treatment where you could go with your baby,” Alex said. “I didn’t even know that existed… So, now I think, ‘Wow, why did I have to rely on jail to save my life?’”

Before Prop 64, the CLL’s funding mostly came from Proposition 47, a 2014 ballot initiative that de-felonized many drug crimes. Alex personally lobbied for Prop 47, later working alongside the American Civil Liberties Union to secure funding for groups like hers.

“To see that come full circle was like, ‘Oh, my God… Wow, is this really happening? Did we do this? Were we able to really do this and pull this off?’”

Alex went from struggling with drugs to finding solutions to their misuse—getting the government to fund her own group’s efforts to help anyone they can; judgment-free.

Still, not everyone wants to admit they get grants from weed taxes.

One well-established L.A. nonprofit with $17 million in 2017 revenue—denied receiving any Prop 64 funding in a March 4 email to Leafly. Funding allocations were finalized months earlier, and state records show it received a $650,000 grant together with an organization that installs solar power systems.

A spokeswoman never replied to an email citing those records and requesting clarification.

Other entities who’ve received Prop 64 funding have historically supported anti-marijuana policy. For example, four years since voters approved Prop 64, greater L.A. County refuses to license stores. And in the city of L.A., red tape might prevent a single new store from opening in 2020. Colorado has as many stores as California, a state 10 times Colorado’s size.

For her part, Alex has no qualms about saying where the money came from.

She jokes of telling her 21-year-old son’s friends: “I’m not telling them to smoke marijuana, but if they do, ‘Buy legal!’” 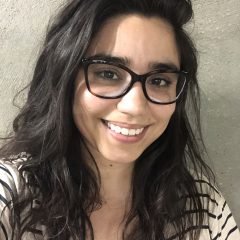 Marissa Wenzke covers cannabis in Los Angeles for Leafly. She is a graduate of Columbia Journalism School and works as a digital news producer for KTLA newscasts.