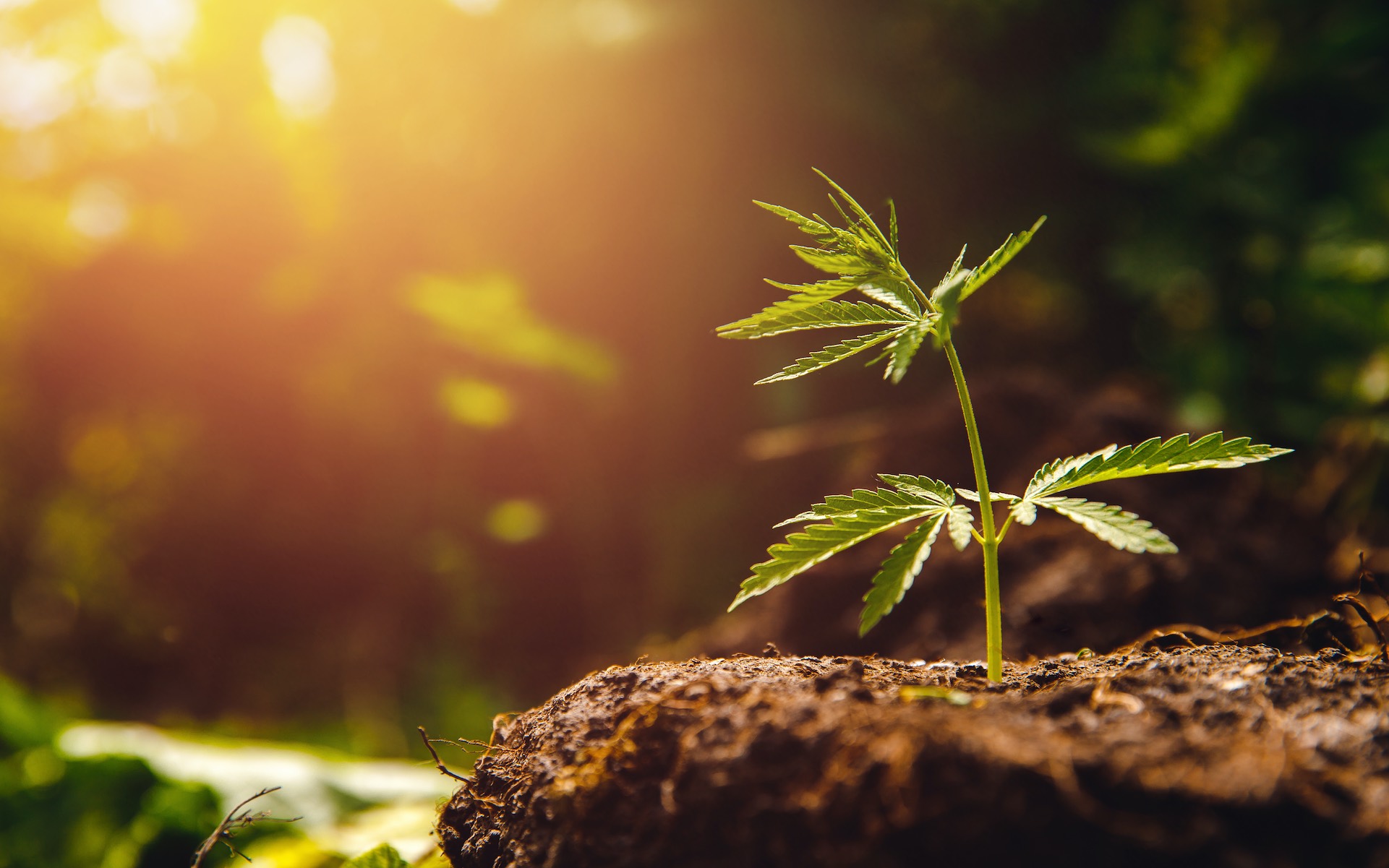 Creating a sustainable cannabis operation requires work and investment up front, but pays off in long-term success. (AdobeStock)

cross the United States, cannabis cultivators, processors and growers are embracing a wide range of remarkable initiatives to make their businesses more sustainable and energy efficient. In Colorado, a state agency is leading an initiative to capture carbon dioxide from a brewery to re-use in a cultivation facility. A new grow operation in Massachusetts installed over four acres of solar panels on its roof and a high-efficiency “microgrid” on its campus. And more companies are turning to hemp as a pragmatic and sustainable alternative to plastic packaging.

Beyond these high-profile projects, though, an affiliated band of organizations and advisors is quietly steering the industry towards a healthier future and helping innovation take flight. Some of the leading groups are:

Whether it’s offering sustainability certifications, advising on efficient lighting equipment, or working with regulators to set sensible regulations, these non-profits are demonstrating that sustainability and efficiency practices aren’t just good for the planet, but a boon for a business’s bottom line as well.

“It’s not just because I care about hugging trees. It’s about these other numbers showing it makes economic sense,” Jacob Mitchell told Leafly. Mitchell is the president and founder of Sustainabis, a Denver-based company that advises cannabis businesses on sustainability practices. “I don’t do it for nature’s sake, because I believe nature will survive humanity. I’m doing it for humanity’s sake because I think we’re making the world unlivable for ourselves.”

Cannabis can be an energy hog

Building sustainability into an indoor cannabis cultivation facility can be extremely challenging. Lighting and HVAC systems are draining and inefficient. High-pressure sodium lighting, which is commonly used in indoor grows, is roughly 500 times stronger than a reading light.

As a result, cannabis is now responsible for over 1% of all electricity use in the United States. Since most of our cities’ electric grids run on fossil fuels, growing cannabis without an eye towards efficiency contributes to greenhouse gas emissions, and in turn, a myriad of interconnected issues for the planet.

“The dirty little secret of the marijuana industry,” wrote the acclaimed climate scientist Evan Mills in 2016 for the Future Cannabis Project, “is that embedded in each average indoor-grown plant is the energy equivalent of 70 gallons of oil.” 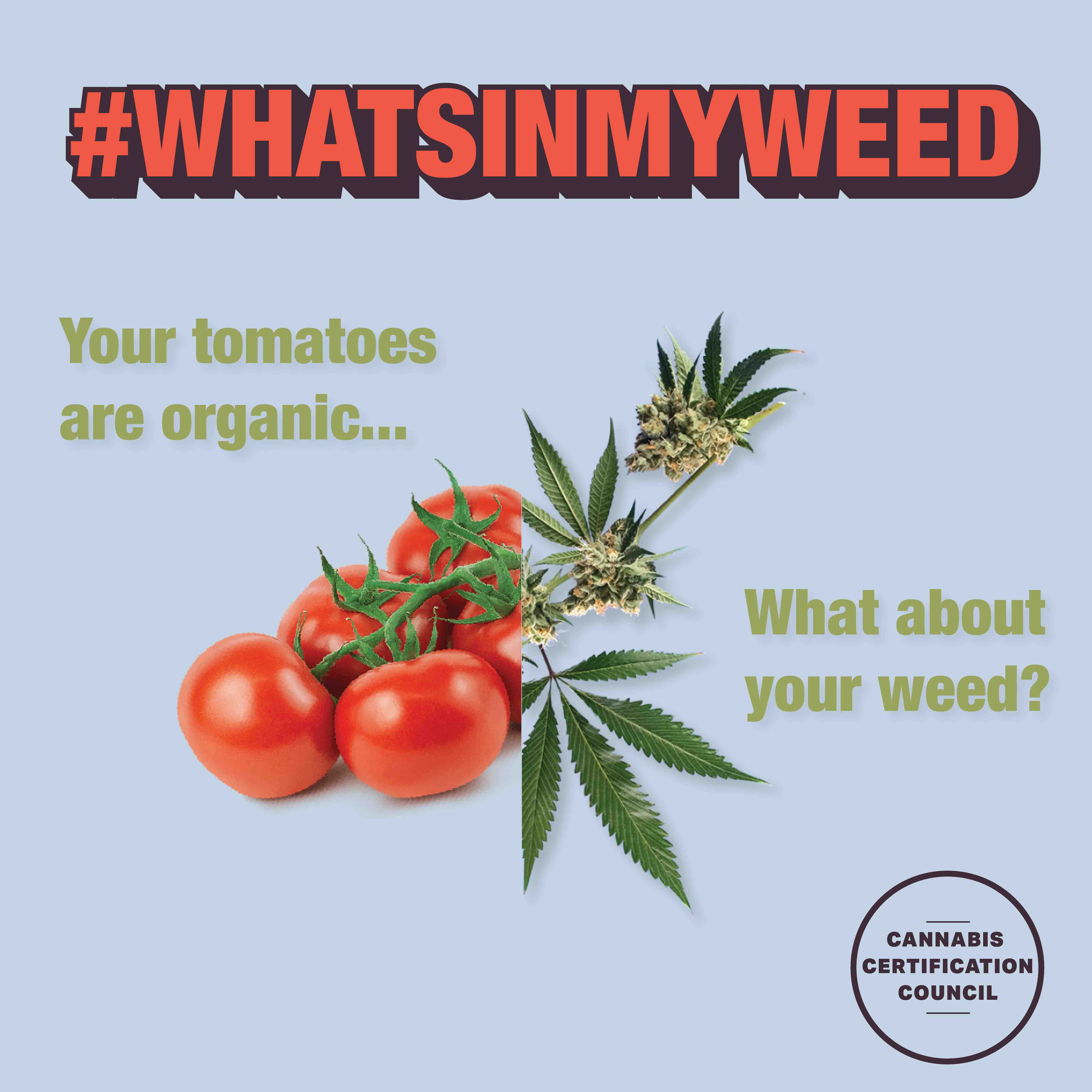 Being ‘unsustainable’ also means, simply, not being able to sustain oneself. Growing indoors often results in huge utility bills that cut into a cultivator’s profits, and make the future of their business less tenable.

Sustainability is “being able to do something that I know I can continue to do tomorrow. I cannot continue to do this tomorrow if I a) burn up the environment and destroy everything around us, and b) I can’t afford to do it,” Jesse Peters, the CEO of the multi-state Mantis Growth Investments and the co-founder of Eco Firma Farms, told Leafly. “If you have your head buried in the sand, saying ‘this sustainability thing is cute, but…’you should wake up. You’re gonna blink, and people are gonna come through here growing [extremely cheap] cannabis, with $100 million sitting in the bank behind their facility. In an acquire-or-kill market, I’m going to acquire you or lose money to ensure you can’t sustain at my price point.”

Start with the energy and water data

In order to enact substantial change, advocates first need to get the lay of the land. Collecting reliable metrics on cultivators’ energy use, water use and more data points is of the utmost importance. “My first step with any consultation is a data request,” Mitchell, the founder of Sustainabis, told Leafly. “If you’re not making decisions based on data, then you’re not making practical, feasible, sustainable decisions.”

Yet advocates have found that growers are often reluctant to share even the most basic information about their operations. “Everyone thinks their cultivation methodology is a trade secret, for the most part,” Peters said. With some growers, he said, “they either don’t know if they can trust that you’re telling the truth [about sustainability] or their ego gets in the way.”

“That’s the story of my life,” added Sam Milton, the founder of the Portland, Maine-based Climate Resources Group (as well as a partner in the RII). “That’s becoming less of an issue, but…the industry is still very risk averse. [Cultivators] don’t want to do anything that’ll upset their process.”

A handful of innovators at the Oregon-based Resource Innovation Institute (RII) changed the data game a few years ago when they created an easy-to-use and anonymous collection tool called the PowerScore.

“We came together and saw the market would need intelligence about how energy is being used in cultivation facilities so we could ultimately set benchmarks on performance…that people should be striving for and agree on,” Derek Smith, RII’s executive director and co-founder, told Leafly. 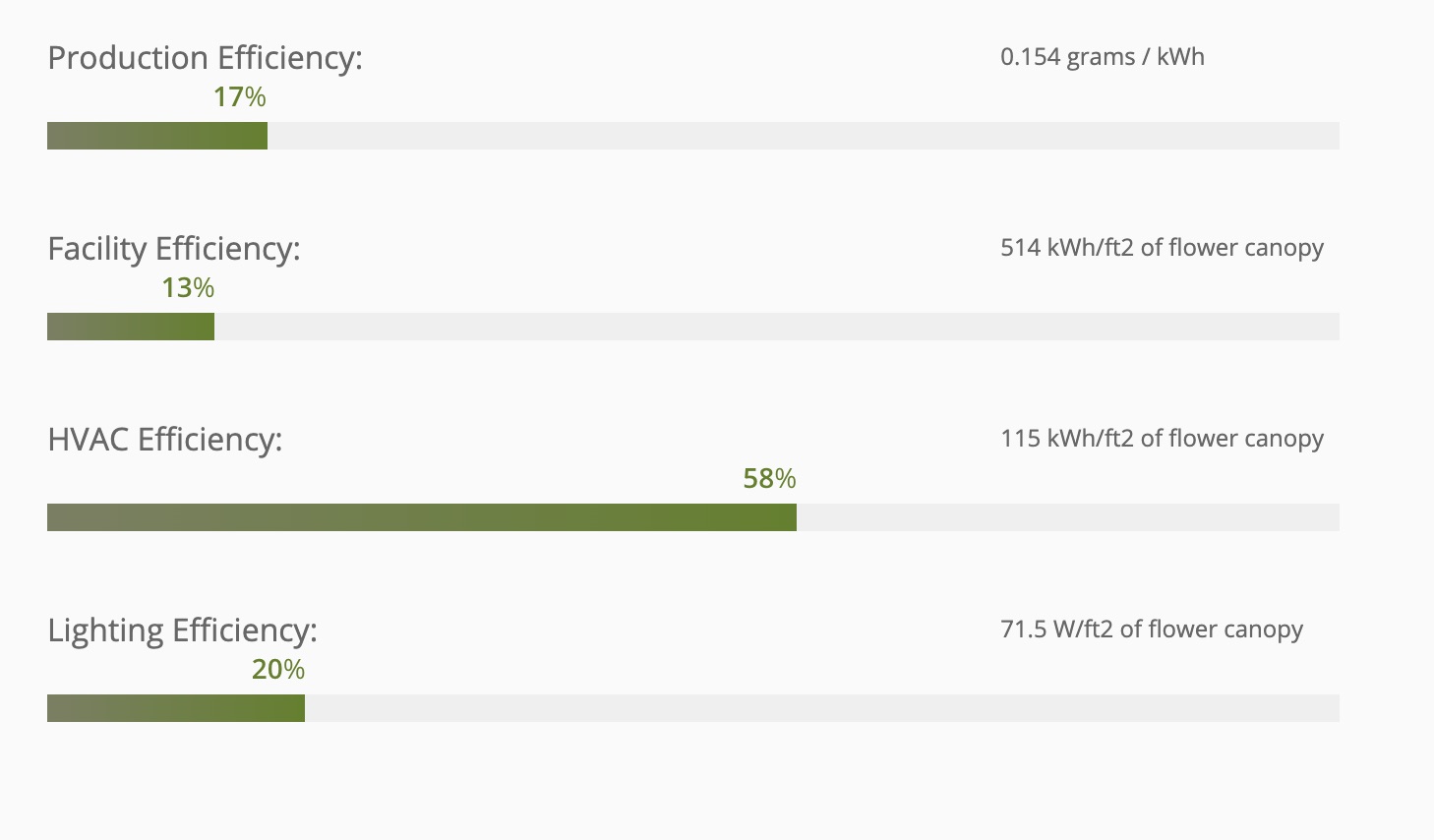 Since 2018, over 300 cultivators have run their data through the PowerScore process. That includes entering their lighting and HVAC usage, utility bills, canopy size and more. The aggregated data, Smith explained, demonstrates that performance among operations is, above all, inconsistent.

“Every facility is a snowflake,” he said. “Every cultivator is doing something different, which is exciting on one hand. But what it reveals is that we’re nowhere near a standard mode of operating.”

With data in hand, advisors and certifying organizations are able to help cultivators become more efficient, ideally before they break ground on a new facility or retrofit. “If you take the time during the design phase to do things properly, and to inform that process through the lens of an experienced energy engineer, that will go a long way to helping you have a high-performance building that doesn’t cost that much more,” said Sam Milton, of Climate Resources Group.

Beyond working with an advisor, a cultivator can look into a certification program. Jacob Policzer, the Co-Founder & Director of Science and Strategy of The Cannabis Conservancy, explained that the guidelines for his organization’s Simply Certified program are quite rigorous, require onsite audits, and emphasize an interconnected holistic system rather than individual parts.

“We look at sustainability as more of a journey and an ethos than an end goal,” Policzer told Leafly. “How does lighting intensity affect temperature, affect humidity and how does an HVAC system’s dehumidification affect all of that? Systems are no longer independent or competing, but working together.”

Beyond contributing to a healthier planet, efficiency measures help businesses save money. Utilizing high-efficiency equipment and practices, Jesse Peters explained, “you can grow better weed cheaper. If I’m paying $2 a gram to grow it, and you’re paying $5 a gram to grow it, I’m going to win.”

Yet while efficiency measures save cultivators in the long run, buying new equipment or retro-fitting a facility demands big upfront costs. “When it comes to the business case for sustainability, you have to look at it as a long-term, low-risk investment, which a lot of cannabis companies don’t have the foresight, or funds, for,” said Sustainabis founder Jacob Mitchell.

Nor is a business going to see savings immediately. “It could be anywhere from eighteen months to five years,” for a cultivator to recoup their expenses, said Sam Milton of Climate Resources Group.

“There are old-school growers who are very much in the mentality that if it ain’t broke, don’t fix it,” added Peters. “If you don’t have investors…say you scrap it together and upgrade, you gotta go buy a lot of lights…but now you have to learn how to grow with them. If you don’t know how and don’t trust anybody to tell you how, you could lose three, four, five harvests. That’s the end of your business.”

Cultivators do have another option: growing outdoors. “It drops ten-fold [for me] to produce a gram outdoors versus indoors,” said Garrett Bent, an organic grower and certified caregiver in Maine. Bent embraces both styles of cultivation, but is particularly interested in growing outdoors in unheated light deprivation greenhouses.

Help from the state

Sustainability advocates and advisors have also found opportunities to collaborate with state and local governments.

In 2018, organizations including the RII, Cannabis Conservancy, Sustainabis and the Cannabis Certification Council’s Ben Gelt teamed up with Denver’s Department of Public Health & Environment to craft the Cannabis Environmental Best Management Practices Guide, a free and public document that includes advice and technical data for cultivators. The guide encompasses everything from a breakdown of various lighting options, to case studies of cultivators, to in-depth explanations of water flow systems.

Starting in July, the Massachusetts Cannabis Control Commission (CCC) will require cultivators to include their PowerScore data in their renewal applications to meet the state’s Global Warming Solutions Act. The CCC will then be able to use that data in order to track businesses’ successes, and identify ways to improve.

“Derek, Sam and all the folks at RII are amazing,” CCC Commissioner Kay Doyle told Leafly. “We’re very grateful for their contributions and encourage more people to get engaged, get involved and participate in public comment, public hearing and contribute to the development of an energy efficient and environmentally sustainable industry.”

Doyle explained that input from advocates also led to regulatory flexibility around facets of efficiency, and lighting in particular. While the state originally implemented an average 36 watt per square foot requirement for larger grows, and 50 watts for smaller grows, they are now able to provide alternative solutions in partnership with the non-profit DesignLights Consortium.

How & where to learn more

Despite the work advocates have done, substantial education is still required to enact widespread change. One of the most effective means of educating industry stakeholders is through in-person (or, during the coronavirus pandemic, virtual) educational events like the Sustainability Symposium series created by the Cannabis Certification Council.

Ben Gelt, the organization’s board chair, says that the events tend to be petri dishes for collaboration as much as opportunities for education. “Historically, it’s been 60-65% plant-touching companies, high level,” he explained. “Those people talk to each other.”

That simple notion of communication may prove to be crucial to the larger success of the sustainability movement. And despite the ominous indicators to the contrary, there’s reason to believe that it’s working, and that change is possible.

“The writing is on the wall for everybody. The issue wasn’t top of mind at all when this started,” Gelt said. “Over time it’s become clear to the operators that have survived that it’s something they will have to address because of economics, as well as the optics of it. I think the picture is improving.”