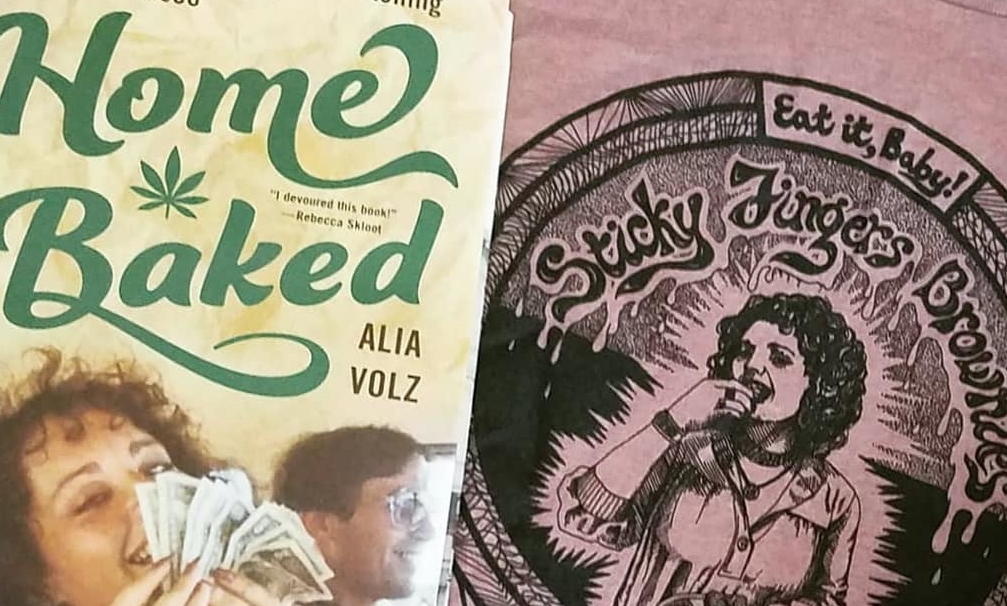 ‘My mom and her partners distributed upward of ten thousand brownies per month. Sometimes I tagged along on deliveries after school.’ (Image: Alia Volz/Houghton Mifflin Harcourt)

In the late 1970s, Volz’s mother Meridy ran Sticky Fingers, perhaps the largest cannabis edibles bakery in America. In the early 1980s, Meridy Volz delivered marijuana brownies to people with HIV/AIDS in the midst of San Francisco’s AIDS crisis, which helped form the foundation of the modern medical marijuana movement. Home Baked will be published on April 20 by Houghton Mifflin Harcourt, and is currently available for pre-order.

hen I was nine, my public elementary school participated in a program known by its slogan: “D.A.R.E. to keep kids off drugs!”

One afternoon per week, the entire fourth grade crowded into the cafeteria, where a uniformed policeman lectured us about the perils of narcotics like marijuana.

We learned techniques for deflecting peer pressure and identifying and avoiding dealers. And we broke into work groups to playact situations. I was careful to follow the program’s script.

I also knew how to keep a secret.

My mom had operated Stick Fingers Brownies—a massive, profoundly illegal marijuana-edibles business—since before I was born. She and her partners, based in San Francisco, distributed upward of ten thousand brownies per month. Sometimes I tagged along on deliveries after school.

We were the people the cop warned my class about. 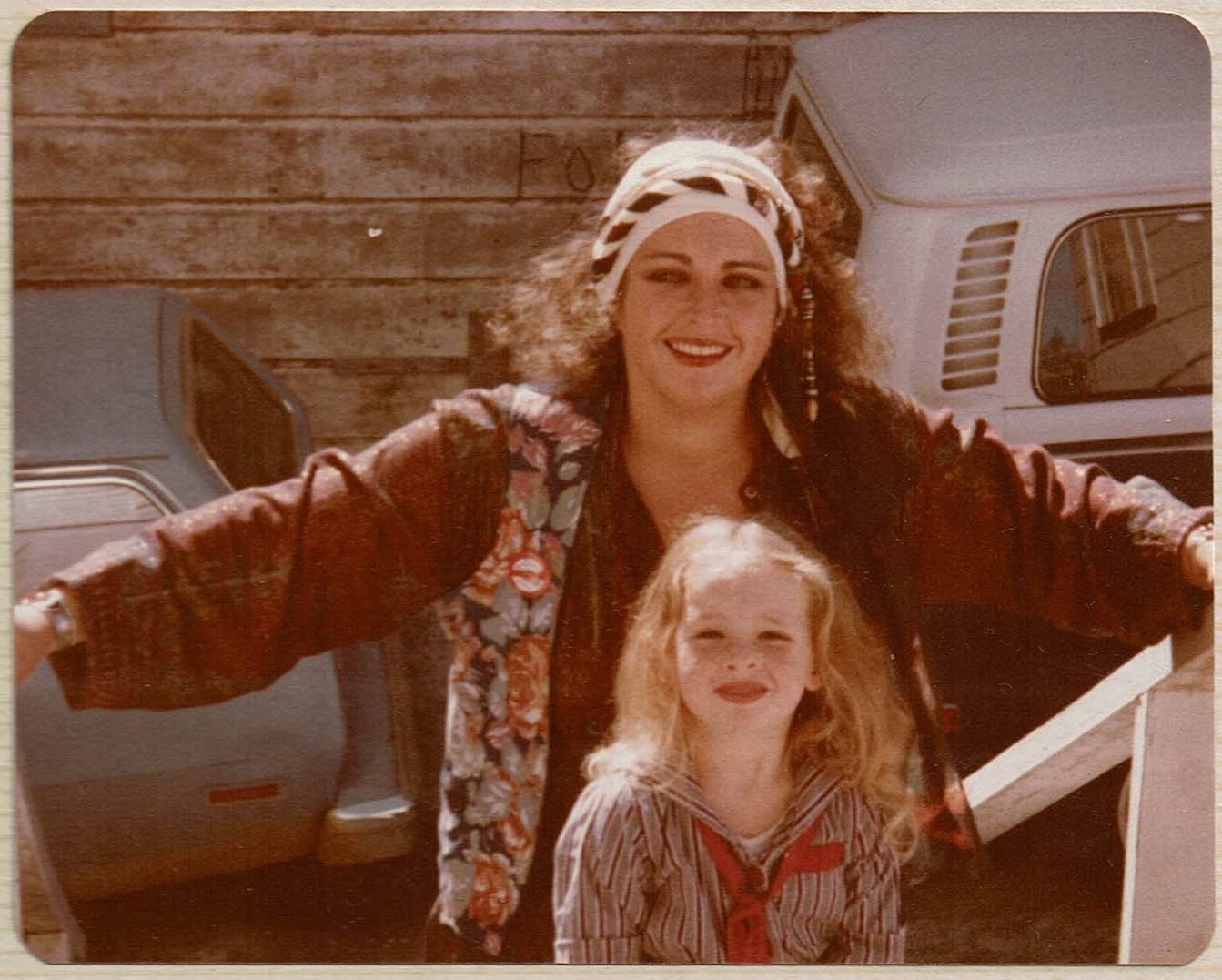 Author Alia Volz with her mother Meridy (“everyone called her Mer”) in San Francisco, 1983. (Courtesy of Alia Volz)

‘My mom’s an artist’

Before I could spell my own name, I understood that I came from an outlaw family. If I ever revealed what my parents did for a living, I knew that they could go to prison and I could become a ward of the state. Whenever adults asked, I said my folks were professional artists—a true statement, though incomplete.

The statute of limitations expired on my family’s crimes years ago. No one is going to do time because of this story. I’m writing with the consent and collaboration of those involved.

I vividly remember my mom dissuading me from taking a “cola” bud the length of my forearm to kindergarten show-and-tell. Now, as I enter my forties, I’m eager to break the silence I grew up with. I can finally bring Mom’s home-baked brownies to share with the rest of class.

Mom grew up a square

My mother Meridy Volz—everyone called her Mer—grew up in Milwaukee in the 1950s. By her own admission she was a square. Then the sixties happened, and she answered the siren call of San Francisco. By the mid-seventies she was making rent as an illustrator when, by chance, she met a strawberry blonde from St. Louis named Shari Mueller.

Share sold homemade bread, muffins, and brownies out of a picnic basket on Fisherman’s Wharf. Her best customers were the street artists who sold crafts to passersby; they couldn’t leave their wares unattended to get breakfast so the baked goods were welcome. Shari priced her regular brownies at a quarter apiece and sold magic brownies for a dollar each. She brought in around $300 per weekend, a tidy sum in 1976. 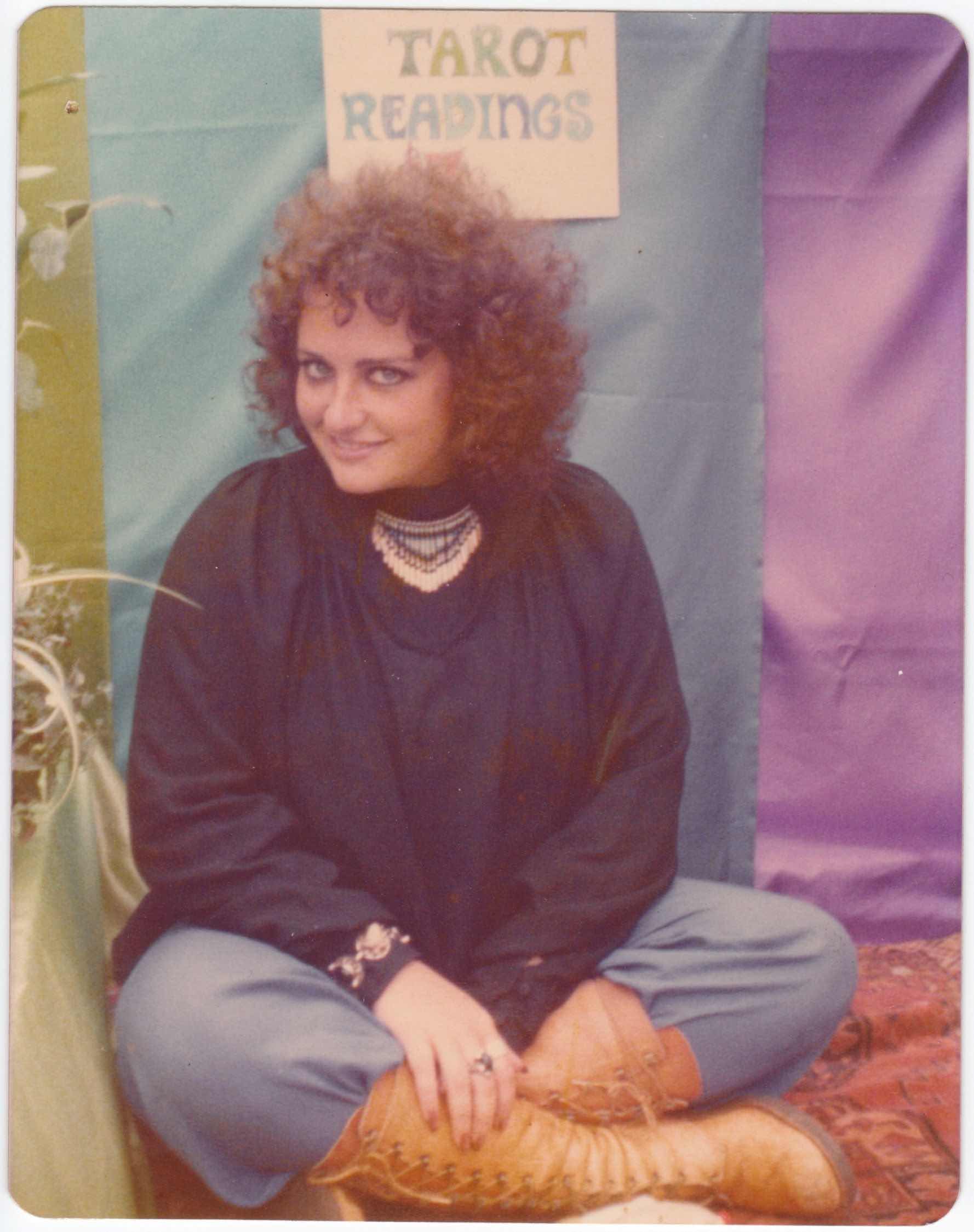 Mer circa 1977: Before taking over the brownie business, she worked as an illustrator and sold tarot card readings in San Francisco. (Photo courtesy of Alia Volz)

Breakfast: coffee and a magic brownie

When my mom hit a slow patch and fell short on rent, she asked Shari how to generate cash. “Oh, I know!” Shari said. “You can come out with me on Saturdays and sell coffee to the street vendors.”

Back then you couldn’t walk to the end of any given block and buy a soy macchiato. Mer cobbled together rent that month and began teaming with Shari on her morning runs.

‘You should take over the business’

A few weeks later, Shari called with a proposition. The magic brownies were generating more income than she’d ever made. But she had decided to move to a New Age commune in Scotland that worshiped nature spirits and grew abnormally large produce.

“I’d like you to take over the business,” she told Mer. “I want you to have it.”

Mer hung up and set aside her drawing materials. Practically speaking, the timing was good for marijuana brownies. In the wake of Watergate, Nixon’s War on Drugs had lost favor in the polls. His successor, Gerald Ford, took a less strident approach toward cannabis, and that attitude filtered down to the state level. In January 1976, California had become the fifth state to decriminalize possession of small quantities of marijuana. 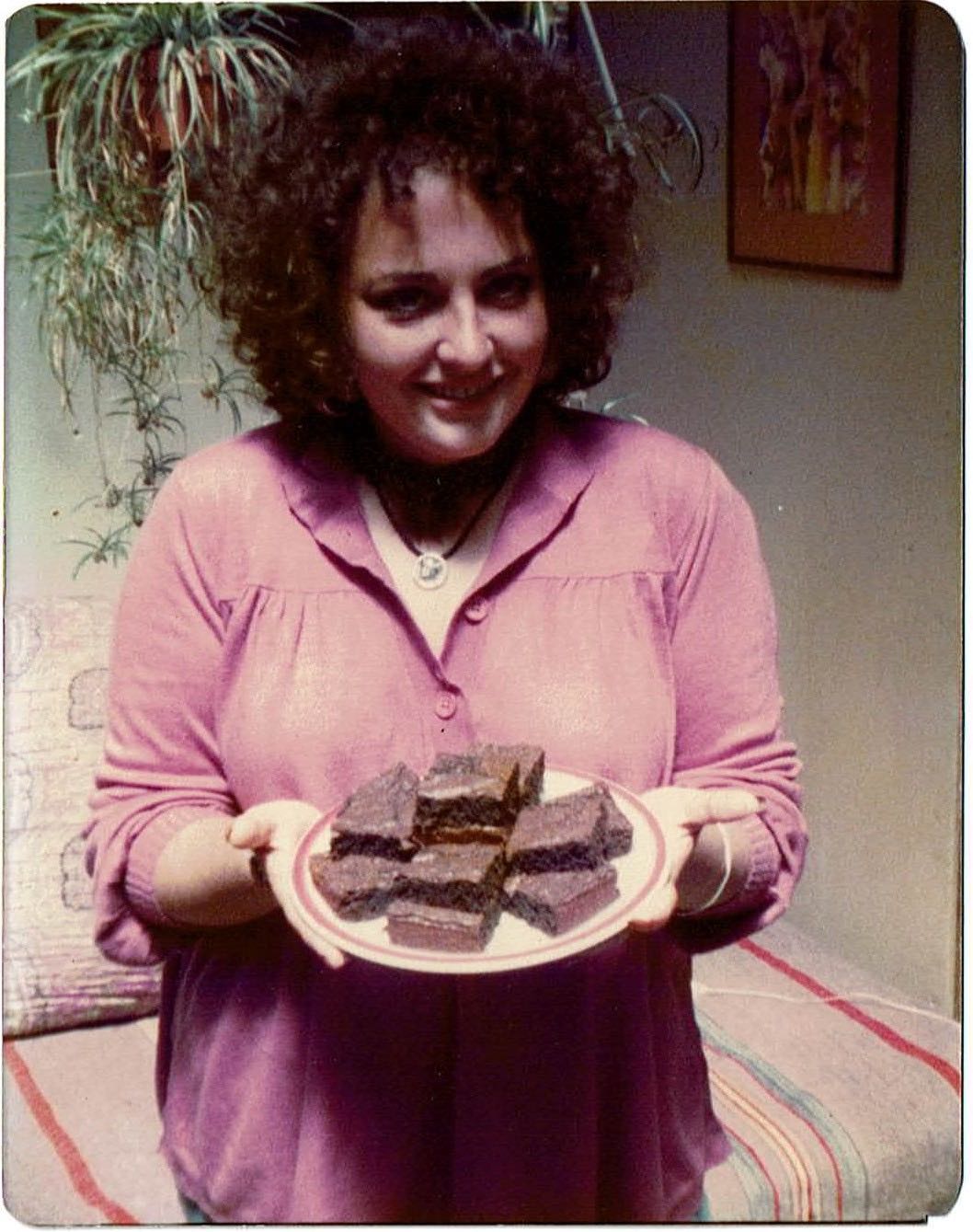 Mer with a fresh batch of the magic brownies that the Fisherman’s Wharf artisans snapped up every morning. (Courtesy of Alia Volz)

Did Mer consider this factor? Did she carefully weigh potential prison time against the stress of her unstable income? Not at all.

Her decision would come down to three brass coins jingling in her palm; the I Ching would guide her actions. Jingling her brass coins in one hand, she repeated a question in her mind: What are the effects of running this bakery?

Mer cast her coins onto the table six times. The progression led her to a passage titled, “14. Ta Yu / Possession in Great Measure.” It was one of the I Ching’s most fortuitous hexagrams, promising “supreme success.” The hexagram was too clear to second-guess.

Saturday mornings, Meridy would set up the coffee and baked goods on a card table at Aquatic Park on Fisherman’s Wharf. Hundreds of craftspeople gathered on the concrete bleachers to mill and gossip while waiting for booth assignments.

Hippies began selling crafts on the waterfront around 1970, and they were not welcome. Merchants fretted that the peddlers’ shaggy outfits would mar the district’s tourist-friendly image.

But the artisans had an effect that neither the merchants nor the street artists seem to have anticipated: Tourists loved it. People visiting San Francisco wanted to see, smell, and even touch real hippies. Now they could take home a souvenir crystal necklace or hand-crocheted shawl that still smelled of Nag Champa incense.

To avoid jockeying over coveted spaces, the vendors used a lottery system. Names were drawn from a diaper pail. The lottery was a slow process and mornings could be miserably cold, especially in summer when massive fog banks clung to the bay. Mer’s mobile bakery had a captive audience.

Selling to the (now famous) buskers

Fisherman’s Wharf came alive with buskers during the day. Among them were the up-and-coming comedians Penn & Teller, A. Whitney Brown, and Robin Williams. A classical pianist wearing a white tuxedo and tails played a white baby grand on a truck bed.

A scraggly-haired hippie calling himself the Automatic Human Jukebox sang tunelessly and played a horn through a hole cut into a refrigerator box. There were ventriloquists and mimes and puppeteers and jugglers and magicians.

“Not a square peg among them,” Mer once recalled. “All of those guys bought. All of them.”

Occasionally, tourists might buy the breads and muffins that Mer carried in her basket, but she kept the magic brownies in a separate pouch and sold them only to the craftspeople and buskers who became her regulars.

Over time, people started calling her the Brownie Lady and it stuck.

The legend of Fantasy Fudge

Mom’s friend Barb did much of the baking, and sometimes she pulled all-nighters to keep up with the demand. During the blue hours of one such night-come-morning, she omitted a crucial ingredient from a batch of magic brownie batter: flour.

After 25 minutes in the oven, her batter had transformed into chocolaty tar. Barb pulled out the pans with a sinking feeling. Eight ounces of pot gone to waste.

Barb’s roommate, Annie, was leaving later that morning to catch a flight to Hawaii and join the Chinese Acrobats of Taiwan as a wardrobe tech on their world tour. She was hanging out in the kitchen when she absent-mindedly swiped the goop from a pan of ruined brownies and licked it off her finger. It was chocolate, after all. Barb joined in.

By the time Annie caught her flight, Barb was so high that vivid colors seemed to rain from the sky. When Mer came to pick up the goods for her afternoon run, Barb met her at the door.

Mer squinted at the pans on the counter. “That doesn’t look right to me.”

“Eat some.” Barb waved her hand through the air and followed it with her eyes. “This stuff is like acid!”

Twenty minutes later, Mer had her bare feet kicked up on Barb’s coffee table and was giggling like a little girl. Customers were going to have to wait because she was in no condition to sell.

That night, while Barb was scarfing everything in her fridge, her roommate phoned from Hawaii.

“Oh my God, Barbara, I am so stoned I don’t know what to do with myself. When I got here, the acrobats were all speaking Chinese—and I could understand them!”

Barb experimented over the next week. She tried to figure out what made the goop so potent and how she might harness that strength. The high was giddy and electric, with sugar and caffeine complementing the marijuana. The absence of flour allowed the body to process it much faster. If a magic brownie was a cup of instant Folgers, this was a double espresso. Barb named the new product Fantasy Fudge.

Undercooking was the key

Undercooking turned out to be key. She learned to heat the cannabis long enough to release the THC without beginning to kill it off. Once she figured that out, Barb not only applied it to Fantasy Fudge but also to her brownies. Leaving them slightly undercooked—a little gooey in the center—increased potency.

Fantasy Fudge was difficult to package. You’d use the spatula to scoop it onto a square of cellophane, just like a regular brownie, but once wrapped, it dissolved into a formless packet of goop. It had to be kept in a cooler or the fudge would slowly liquify. Even handling wrapped fudge turned your hands greenish black with sticky residue.

The brand ‘Sticky Fingers’ is born

One warm Saturday after a sales run, Barb stopped by the Shrader apartment, exhausted. “Where’s Mer?” she asked.

“I think she’s still on the Wharf.”

Barb wiggled her tarred fingers. “It looks like I’ve been working on cars,” she said. Then she broke into a dazzling grin. “I’ve got it! We’ll call them Sticky Fingers brownies.”

Her roommate Donald trotted into his room, returning with the Sticky Fingers album, which he slid onto the turntable. With the Rolling Stones rocking on the record player and a fresh fog greasing the Haight like Crisco, Barb and Donald twisted up a celebratory joint. 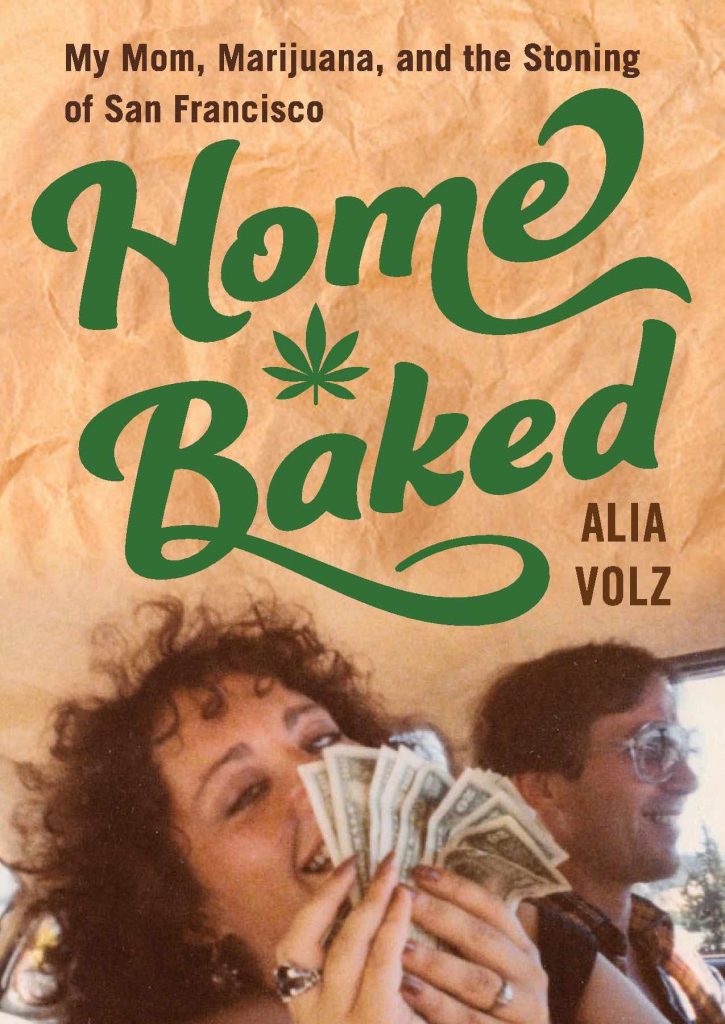 Home Baked: My Mom, Marijuana, and the Stoning of San Francisco by memoirist Alia Volz will be published by Houghton Mifflin Harcourt on April 20. It’s available now for preorder at IndieBound, Powell’s Books, Amazon, and at a local bookstore near you.

Alia Volz is a homegrown San Franciscan. Her writing appears in The Best American Essays 2017, the New York Times, Tin House, Threepenny Review, and the anthologies Dig If You Will The Picture: Remembering Prince and Golden State 2017: Best New Writing from California.