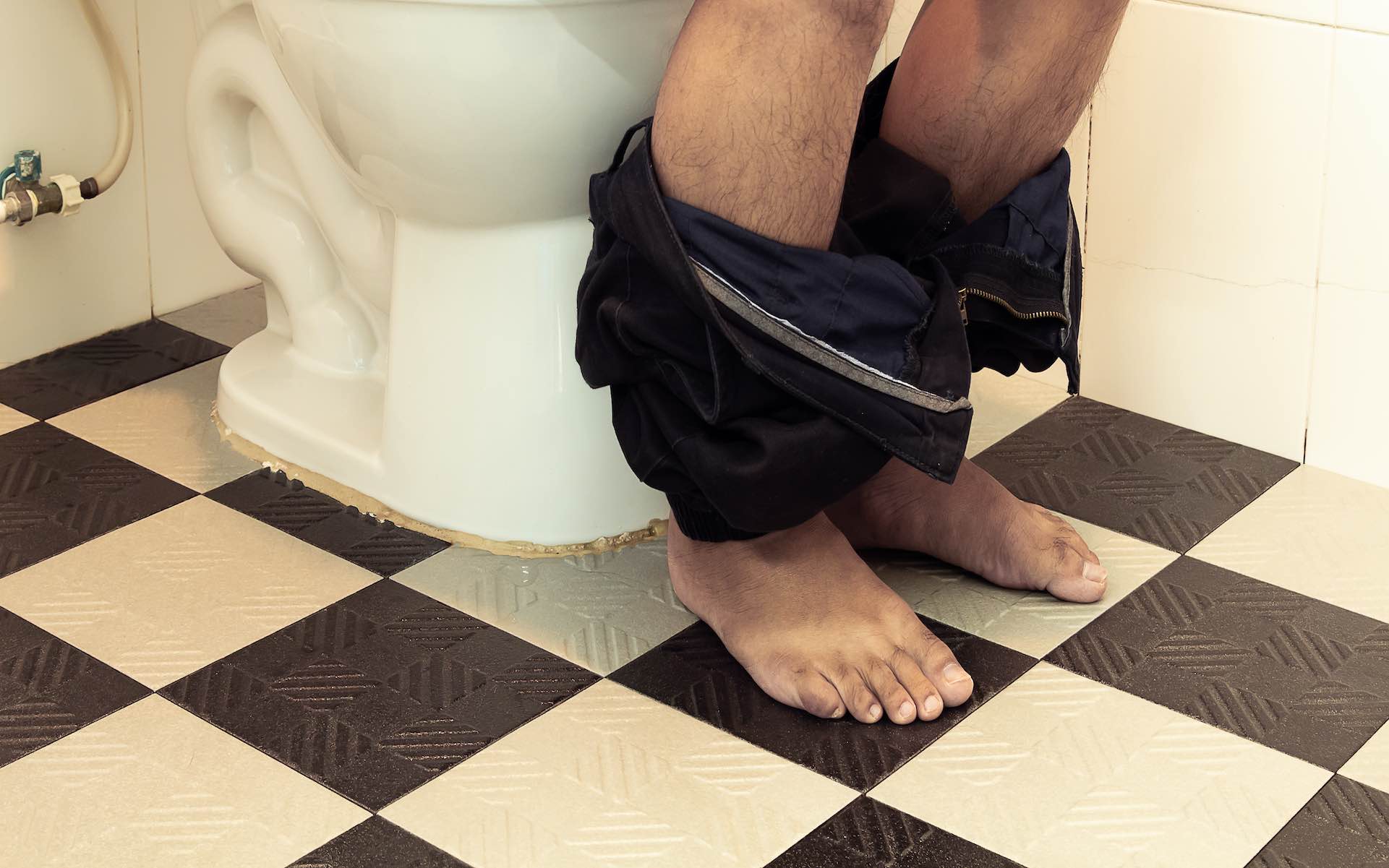 Have you ever sat down for a nice session but after a few tokes suddenly have to get up to hit the bathroom? I noticed a connection so I asked the internet, which provided abundant anecdotal evidence, proving I wasn’t alone in my pondering. After I started peeking into what science had to say on the matter, my curiosity only increased.

I did a deep dive into studies on the subject, as well as consulted a couple experts, and it turns out the connection between smoking a bowl and going #2 is no coincidence. Between cannabis calming our nerves, its effect on the gut’s microbiome, and the endocannabinoid system being involved in the activity in this department, it looks like weed can, indeed, make us doodie.

Too stressed to go

I spoke with medical cannabis expert and integrative medicine physician Dustin Sulak, D.O. “Endocannabinoids absolutely do affect motility, both directly and indirectly. The most powerful way in which cannabis could help a person defecate is by helping them to relax and get into a more parasympathetic state,” said Sulak.

He continued, “Conversely, when it’s time to relax and empty our bowels, we don’t want to feel threatened. That has to happen in a place where we feel comfortable. But, unfortunately, a lot of people are taking their stressors around with them, even into the bathroom, with their phones or just in their minds, remaining stressed out, feeling threatened in some way.”

But cannabis, and endocannabinoids that our bodies produce, can help. “Our inner pharmacy’s version of cannabis, the endocannabinoids, and herbal cannabis, have the ability to suppress this excessive sympathetic activity. So if the fight-or-flight response is turned on too strongly, the right dose of cannabis can suppress it. This is obvious to people who use cannabis to help them relax and find relief from anxiety. The same mechanism would allow someone to shift into rest and digest, or parasympathetic dominance, and get the job done,” he said.

Endocannabinoids help keep the body in balance. One of those endocannabinoids, 2-AG, is an important physiologic regulator of gastrointestinal motility—i.e., pooping—and behaves like THC. “That’s one of our body’s signaling molecules that mimics THC, or THC mimics it. 2-AG is active in regulating the sympathetic and parasympathetic influence on the gut, and in the gut itself, where it suppresses excessive activity and brings the system into balance,” said Sulak.

So in this way, cannabis could lead to a deuce by helping keep our nervous system and our gut in the “Goldilocks zone,” or the healthy range of activity.

Cannabis can also help someone get into the needed relaxed state by relieving pain. “When people are in chronic pain, even if it has nothing to do with the rectum—if it’s their foot or their leg or their head—that still creates a kind of threatening internal state. So it can be hard when in pain or feeling anxiety to relax enough to use the bathroom. Cannabis can be very useful for that,” said Sulak.

Dr. Sulak concluded with a word of caution: “For people with constipation not related to stress or pain, cannabis could potentially worsen the issue because it can suppress muscular contractions and secretion in the colon, the same ways in which it can help with diarrhea.”

More on cannabis and BMs

The endocannabinoid system (ECS) is also integral to the brain-gut axis, which modulates activity in this realm, including helping people poop. This 2016 study says that the ECS is “An important physiologic regulator of gastrointestinal motility,” meaning bowel movements.

Foremost psychopharmacology researcher Ethan Russo, M.D., also told us, “A lot of people note easier bowel movements after cannabis. This can alleviate both constipation or diarrhea associated with irritable bowel syndrome, a presumptive clinical endocannabinoid deficiency syndrome. THC also positively alters the gut microbiome and this effect should not be discredited.”

Additionally, a 2019 study found that cannabis consumption was associated with a 30% decrease in constipation.

So, if you’ve ever wondered if there’s a connection between enjoying herb and needing to head for a #2—‘tis not in your imagination. Next time you need a little help, maybe try sparking up a doobie so you can dookie.

Meg Hartley is an Alaska-grown writer who lives and loves in Long Beach, California. Check out more of her work via HowILostAllMyF-cks.com and by following her on the socials, @howilostallmyfs.